Human Rights Initiative, Open Society Initiative for Europe, and Arcus Foundation have just released a joint call for proposals for “Reaching the Moveable Middle,” an outcome of the September Barcelona “Reaching the Moveable Middle” gathering which The Lafayette Practice designed and coordinated in consultation with the Open Society Foundation. The deadline for submitting proposals is March 6, 2015.

IHRFG recently held a two-day conference to find new approaches to combating ongoing human rights violations. Following the event, the IHRFG blog shares reflections from grantmakers who came together to explore this topic through various lenses. Click here to read more lessons and join the conversation!

Participatory grantmaking percolated at almost every session, whether participants were talking about measurement and evaluation systems or about free and informed prior consent. The San Francisco meeting also marked the launch of a new Participatory Grantmaking Working Group focused on how donors effectively involve affected communities in decision-making. A report released last year by the Lafayette Practice entitled Who Decides: How participatory grantmaking benefits donors, communities and movements catalysed the collaboration by bringing together donors that were already using participatory models. Yet, what surprised me was the unity around the moral imperative to better involve affected communities in all grantmaking models.​

Matthew “Matty” Hart, Founder and Principal
In 2014, Hart continued to serve as Board Chair of The Calamus Foundation (DE) and as a Board Member of Funders for LGBTQ Issues.

Publication of Who Decides: How Participatory Grantmaking Benefits Donors, Communities and Movements 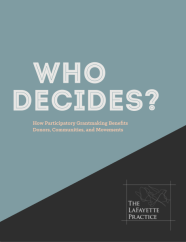 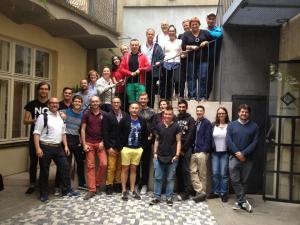 Designed, and coordinated by Prague Pride, Open Society Foundation, and The Lafayette Practice and held during Pride Week in Prague, August 13-15, 2014.

Beginning in May 2014, TLP worked to organize a three-day training for a pre-selected cohort of Open Society Foundations (OSF) grantees/LGBT organizations in the Eastern and Central Europe regions. The training centered on cultivation of domestic philanthropy with particular attention to recruiting individual private donors and generating corporate and local business support. Through tailored organizational analysis, key trainings, and strategic fundraising planning support, TLP aimed to support each organization to articulate their skills, weaknesses and opportunities, and build strategic capacity in new areas of fundraising and organizational development.

Reaching the Moveable Middle: Counteracting the Attack on LGBTI and Reproductive Rights in Europe.

Designed and coordinated by The Lafayette Practice in consultation with Open Society Foundation, and held in Barcelona from September 28-30, 2014.

Reaching the Moveable Middle created a unique space, bringing together donors, activists, and NGOs. This meeting was the first of its kind, convening LGBTI activists, sexual health and reproductive rights (SHRR) activists, and faith communities to explore the creation of a shared framework for activities and strategy development. This stage one meeting was intended to set the groundwork for key areas of shared activities, strategy and knowledge development, and donor alignment. In total, sixty-nine participants gathered for three days. This included ten OSF staff, fourteen panelists, and thirty-eight general participants. In addition, seven donor representatives attended, from Mama Cash, Astraea, Arcus, Wellspring, and Sigrid Rausing Trust.

Participatory Grantmaking Funds (PGFs) represent an important evolution in the form and practice of philanthropy, with benefits including innovation, flexibility, transparency and inclusion. PGFs can serve as a powerful intermediary between grassroots organizing and traditional donors, functioning as learning hubs for institutional donors and participants. They often offer significant technical assistance and support in addition to grants. In doing so, they help build the capacities of their grantees and their communities of concern. Read More…

Check out the article and participate in the online conversation at the IHRFG blog.

The Conference second panel ‘Mobilising Leadership’ brought together activists representing diverse aspects of LGBTI movements in different European countries. Among voices from Germany, Georgia, Bosnia and Herzegovina, Belgium and Cyprus, and Latvian LGBTI movement.
​This session focused on the dynamics and differences in leadership that each of the individuals and their organizations bring to the movement.

Video of the panel was livestreamed and is now available to watch on vimeo! More about the panel below the video.

END_OF_DOCUMENT_TOKEN_TO_BE_REPLACED

Today in the Financial Times,  read Joy of Giving By Sarah Murray.

An interesting examination of US based LGBT Donors and our history and predicting trends.

“Since Rand Skolnick died from cancer in 2008, Terrence Meck has been using the funds his partner left to give away $1m a year, with half going to lesbian, gay, bisexual and transgender (LGBT) youth programmes and the rest to health initiatives.

For Meck, this honours the man he loved. However, his strategy also reflects a broader trend among gay philanthropists – their giving increasingly extends beyond LGBT causes.

For Meck, who makes grants through the Palette Fund, the funding allocation reflects his relationship with Skolnick. “We didn’t live an exclusively gay life. We were out and proud, but it didn’t define us,” he says. “And Rand’s family business was in vitamins and health, so the nutrition side was a big part of his life.”

Of course, philanthropists in the gay community make plenty of gifts to support their peers. “I keep giving because all LGBT people have to be on the front lines in winning their own equality,” says Tim Gill, the entrepreneur and philanthropist who founded Quark, the developer of page-layout software, and created the Gill Foundation in 1994.

As well as equality initiatives, programmes providing easier access to services such as health and education are also well funded. “LGBT people have always built their own institutions and communities of concern,” says Matthew Hart, founder of the Paris-based Lafayette Practice, whose clients include LGBT donors.”

You can read the complete article HERE